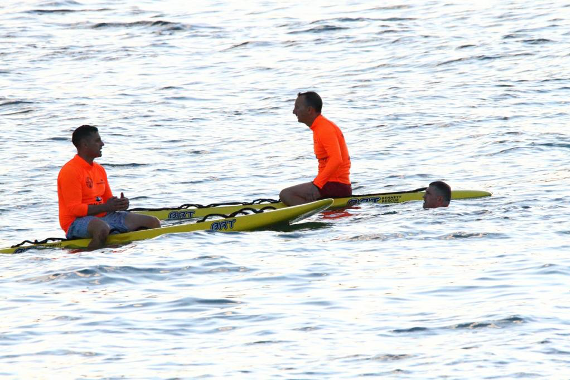 With the average Australian Defence Force (ADF) career lasting just seven years, about 5,500 people leave the armed forces every year and face challenges returning to everyday life and adapting their unique skills from the ADF and using them to their full potential in civilian life. Not surprisingly, many encounter mental health issues following their transition out.

Many ADF members seek:
•           a chance to redirect military service into community service;
•           solidarity, mateship and service which provides purpose; and
•           to find new support networks and communities.

Australian Service members have seen high operational activity in the last two decades and offer some of the most experienced and dependable personnel. A key objective is to utilise these skills. Surf Lifesaving has always had a connection with the Australian Military, with roots going back a century.

For a number of years, the Club has used our BBQ on ANZAC morning to raise funds for the Bondi Junction Veterans Centre, which is supported in the main by North Bondi RSL. During his time as Club President, Mark Cotter became increasingly aware of the issues associated with ADF members and them transitioning into civilian life. Mark also had several friends in the ADF and with these issues at the forefront of his mind, he formulated a plan to use Surf Life Saving as a conduit to assist ADF personnel reintegrating to civilian life.

“I believe that joining a Surf Club for these members will not only help to integrate them into the wider community but the Surf Life Saving movement and Club life also have a number of similarities that may appeal to Defence Force members. That’s without even accounting for the fantastic skill set that such people can bring to our Club and to other SLSCs across the country”.

NBSLSC Club members James Isbell and James Brown, who are both officials of North Bondi RSL, also helped underpin this initiative by working on the various learning areas that the potential ADF candidates already have as part of their training. With assistance from Rob aka “Barney” King, Mark Cotter also attend a number of meetings with ADF personnel at Victoria Barracks in Paddington, who were trying to get similar programs off the ground.

“We had additional buy-in from Veteran Sports Australia, Australia Remembers and many other clubs and individuals”, said Mark; “it just seemed that whoever I spoke to instantly supported the idea and came on board to help”.

There was also significant support from SLS Sydney and SLSNSW, in particular CEO Steve Pearce; and sponsorship from the NSW Minister for Police & Emergency Services.

So, after several years and considerable effort spent in conceiving and scoping this initiative:

Three ADF candidates, all Waverley locals participated in a course which focussed on identifying existing skills, then tailoring the training and adapting to SLS requirements.

Michael Boland, Head of Education, and Yon Golan, Trainer and Patrol Captain (who has a background in military service and is intimately familiar with the difficulties in re-integration into civilian life), continued the work of James Isbell and James Brown, to devise a bespoke Bronze course that would fit with the participants’ speciality background. Michael and Yon (pictured below) delivered the course with the assistance of and assessment by the course facilitator Ryan Tindall from Bronte SLSC.

A small learning environment where the trainer and facilitator had defence force backgrounds helped to make the candidates feel comfortable and allowed them to demonstrate their knowledge and experience, reducing the timing and length of the course to under 4 weeks. This was critical to integrating the candidates more efficiently into Lifesaving.

Where to from here?

“Congratulations on the ADF Pilot Bronze Medallion Course being named winner of the Surf Life Saving Sydney 2019-2020 Innovation Award, as formally announced in our online ‘virtual’ Awards of Excellence on Saturday 30 May.

North Bondi SLSC is now formulating a more comprehensive plan on how to deliver this Defence Force Fast-Track Bronze course as part of its BM annual course offering, and to create a framework that can be used across other Australian Surf clubs to encourage ADF members to join SLSA.

Today’s servicemen and women operate in a highly professional, high-tech dynamic environment. They have acquired the type of skills that lifesaving values so much. ADF members have the same core values and therefore, some are likely to stay within the organisation longer. One joins the defence forces to serve so it’s a natural fit to join SLS to serve the community.

Overall, the impact has been extremely positive for each of the candidates. Our desire is to help with the integration of service members into the club using their skills, knowledge and training to help us continuously improve.

We envisage this initiative will also help prevent suicide within the veteran community by providing the missing link some ADF members face when leaving the service.

With thanks and congratulations to the foresight, skill and dedication of our Club members at the heart of this award-winning innovation: Mark Cotter, James Isbell, James Brown, Robert King, Michael Boland and Yon Golan. What a wonderful and worthwhile initiative that can make such a positive difference to people’s lives – you’ve done the Club proud indeed.